As of this writing, it is technically “in press” and its permanent publication data is not yet formalized. So, I considered it as a possible 2013 publication. But, it was published online in Fall 2012 and emailed Jeffrey Kuznekoff (Ohio University) if he would doing anything more with the data.

The goal of this study is to determine how gamers’ reactions to male voices differ from reactions to female voices. The authors conducted an observational study with an experimental design to play in and record multiplayer matches (N = 245) of a video game. The researchers played against 1,660 unique gamers and broadcasted pre-recorded audio clips of either a man or a woman speaking. Gamers’ reactions were digitally recorded, capturing what was said and heard during the game. Independent coders were used to conduct a quantitative content analysis of game data. Findings indicate that, on average, the female voice received three times as many negative comments as the male voice or no voice. In addition, the female voice received more queries and more messages from other gamers than the male voice or no voice.

When I saw the numbers, this would require a tremendous undertaking to transcribe and code the messages.

Their literature review consisted mostly research on sexual content in videogames. The general gist of sexual content in videogames is exposure to such content leads to attitudes that is unfavourable towards women. For example, being more accepting of rape myths and tolerant towards sexual harassment in non-videogame social contexts. Some theoretical explanations are that exposure to sexual stereotypes, such as women being submissive and sexual objects would bring up these stereotypes at the foreground of our consciousness and see women that way in the short term. I say a short term because that’s what current studies have found, although it is not unreasonable to say that there are long term effects if you look into the literature. The authors reasoned that such misrepresented exposure might affect players communication with other players, in particular with female players.

I’d like to complement another factor and this is from news observations (e.g. Kotaku, reddit, etc.). One observation is the misrepresentation of female gamers in players’ direct experiences with them. Taking the spiral of silence perspective, I present hypothetical scenarios. An average women who starts playing videogames would be surprised and offended when she hears sexist language from players. When she starts using a microphone, she is bombarded by a lot of attention, creepy and hostile. One way to continue playing is to stop using the microphone. In effect, she becomes invisible to others, however we do not know what percentage of women who do that. Certainly there are others who persist, such as Jenny Haniver, and provides a counter-force to the “sexualized gamer girl” stereotype. Statistically, there will always be some number of women who are not bothered or enjoy such attention, thus they remain on the screen and speakers. However, we do not know if they are representative as researchers lack the means to assess this. On the other hand, some women may not present themselves in a sexualized manner and yet the men may perceive in that way because of her gender.  Unfortunately, these women are what male gamers would meet, seek to shape and reinforce their beliefs about gamer girls. This is one of the possible reasons, albeit not a sociological causal force, why male gamers would treat gamer girls in a sexually degrading manner. On the other hand, stereotype research would suggest that playing with a counter-examplar or even an average game girl would greatly dispel the “sexualized gamer girl” stereotype. 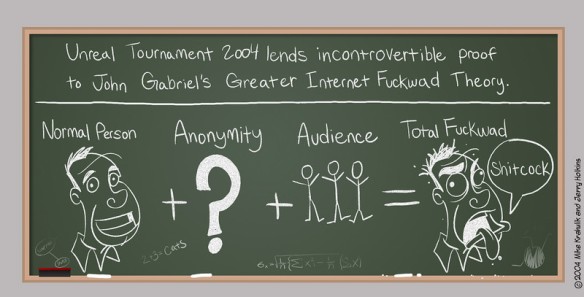 Why do people say or do things on the internet that they would not normally do in real life? Most internet lore usually points at anonymity summarily depicted by a nearly-decade old Penny Arcade comic. The authors brought in the hyperpersonal model of computer-mediated communication which posits that users can use the affordances of their channel to exert control over their self-presentation. Not in the Kitchen Anymore provides many examples where men would harass Jenny Haniver because of their relative anonymity and the low chance of playing with her again since the matches are randomized in the games she played. Although, some ask for her personal information, it’s interesting how sharing personal information plays in the hyperpersonal model. The authors focused on a component, hypernegative effects where time restrictions and no expectations of future interactions and given the relative efforts to communicate via computers, receivers would read overly negative interpretations and sources would spew out ill regards and hostile messages. The authors were interested in this due to past research toward women [example], given how women are depicted in media, the affordances of computer-mediated communication and the hostility of videogame environments.

The authors, and with some technical help, collected the data. First, they created three Xbox Live accounts for three conditions: one male voice, one female voice and one voiceless. Their gamertags have very similar names.

The authors played Halo 3, Jeff Kuznekoff is an experienced player whereas Lindsey Rose was inexperienced, this allowed to collect data from players with a diverse range of skill levels. The authors use Halo 3’s matchmaking system which pairs players with similar skill levels. Furthermore, there are ranked playlists so a player has a skill level for each playlist. The matchmaking system randomly assigns players to a match. The authors decided to use one playlist, Team Slayer, it was the most popular playlist where 25% of all online play occurs in that playlist.

To create the male and female voices, they pre-recorded phrases that were consistently used during data collection, kind of like those funny celebrity soundboards. They had three types of phrases: pregame lobby, gameplay and postgame lobby. The phrases were innocuous and designed not to provoke a negative reaction. Some examples written in the article are “hi everybody”,  “nice job so far”, thanks for the game, bye”. These phrases could have been used in actual gameplay. Although, there were no prior content analysis of player utterances, but Jeff Kuznekoff played Halo 3 so that’s fine and if you object, then email him.

With the help of Game Research and Immersive Design, the authors recorded their play sessions. The authors together played a total of 245 games. 82 in the voiceless condition, 81 in the male voice condition and 82 in the female voice condition. Each game had typically seven other players, which resulted 1711 players who players along with the researchers, 1660 were unique gamers, so quite a small chance of meeting the same player. Additional information include percentages of wins and losses, average skill and verbal communications between conditions, there was nothing particular besides that about 80% of games had verbal communications.

The authors hired three independent coders to pour over the data and were instructed to look for directed comments aimed at the experimenter. The coding scheme were simply three categories: directed negative, directed positive and queries. Why not a more complex coding scheme? Are you kidding? Data from 245 games with an average of 7 players per games which amounted to 1711 players and how many lines per player and per game? That could well exceed 5,000 lines. I am just glad that they got this published and in good time.

There were 163 games that had verbal communications and thus were in the analysis. The authors conducted ANOVAs. For directed negative, the female voice received significantly more (M = 2.82, SD = 4.79) negative comments than the male voice (M = 1.24, SD = 2.29) and the voiceless one (M = 0.61, SD = 1.79). Looking at the standard deviations, it seemed that there could be game sessions with no negative comments or tons of it for the female player. Numbers wise, the female player had received three times as many directed negatives than the male player or voiceless one.

The take home message is that female players when heard are not treated as well as their male counterparts despite skill level, wins or losses. This also provides another sort of evidence that those who don’t speak, are mostly left alone (verbally) which may seem a viable option for girl gamers and reasonable male players to stay playing videogames without hassle.

The authors noted in detail specific comments directed at the female voice and it is incredibly similar to the ones from Not in The Kitchen Anymore. With regards to the positive correlations between skill level, queries and directed positive comments among female players, the authors could not speculate any further from their correlational findings. My speculation would be pessimistic in that a girl gamer who demonstrate great skill would appear to break the men’s low expectancies of female players which prompted them to ask questions and give positive comments, either to elicit further conversations and/or establish some sort of relationship.

With regards to theory and the hyperpersonal model of computer-mediated communication, they argued that the data provides supporting evidence in that the matchmaking systems makes it possible that players would not encounter the same players again, some measure of anonymity, although I am pretty sure some might try to find them and harass off-game. The authors cautioned against generalizing the results to different games as they only used Halo 3 as their sample frame. However, I would argue this occurs at least across all videogames, there will be not a single videogame that has no incidence of gendered discrimination. Nevertheless, the degree of sexual harassment differs across videogames based on my data and second-hand observations, although I couldn’t get much data from Halo and CoD players, they are pretty much silent.

content in that developers may try their best to avoid sexual stereotypes, it is possible that gamers themselves will maintain and perpetuate these stereotypes in their gameplay via verbal communication as shown in this study and  mods (IMO).

19 thoughts on “Reactions to a woman’s voice in an FPS game (Kuznekoff & Rose, in press)”