The Electronic Software Association’s statistics of the gender breakdown of people who play videogames is commonly cited pretty much everywhere. However, this statistic cannot answer further inquiries, such as the gender proportions across genres, play time, or even motivations to play videogames. There are motivational differences in gamers’ preferences for genres, such as competition, enjoyment in the broadest term, violence, thrill seeking among others. This comes from common perceptions among gamers as well as good number of studies.

I recently noticed two studies published just a week apart from each other. Tilo Hartmann and colleagues’ publication in New Media & Society and Johannes Breuer and colleagues’ publication in Communication Research Reports. Later in May at the International Communication Association’s annual meeting in Seattle, two more related studies were presented. Lotte Vermeulen and Jan Van Looy’s study on stereotype perception and Claudia Wilhelm’s study on gender stereotypes in gaming behavior.

Given that I am reviewing four studies instead of one, the amount of detail given to each is reduced accordingly.

The four studies examined factors in people’s preferences for videogame genres, although their different hypotheses complement each other. Hartmann and colleagues sought to examine the role of anticipated emotions of playing a violent videogame. Breuer and colleagues sought to examine whether adolescents, young and older adults’ aggressive personalities and motives for playing FPS and action games differ. Vermeulen and van Looy examined the intersection of the perceptions gender and gamer-related stereotypes. Wilhelm examined the influence of gender role orientations, its influence on videogame motives and genre preferences.

The four studies surveyed European respondents and their methodologies share some similarities and each study have their measures for meeting their respective research questions. They measured videogame genres (e.g. First-person shooter, sports, strategy, etc.), however the question posed and number of genres differ, Breuer et al. asked how much they liked the genres whereas the others asked how much they played the genres. Excluding Breuer et al., they assessed for videogame motivations (e.g. competition, challenge, needs, intrinsic motivations), although they differ based on their respective research goals. Breuer and colleagues surveyed through a telephone survey as part of a funded project whereas the other three surveyed respondents online. Hartmann et al. had respondents watch a trailer [Link] for Bad Company 2 and what sort of anticipated emotions they would feel if they played the game.

Hartmann and company conducted a structural equation model and this is what they found in graphical form. 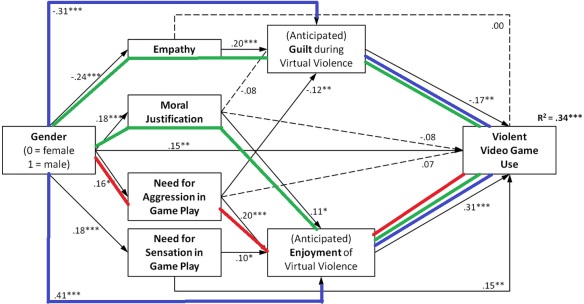 Some descriptive statistics, the adolescent group scored highest in terms of aggressive personality scores, time spent playing videogames and preferences for FPS and action games. The scores decrease from youngest group to the oldest.

The authors conducted three regressions to examine the relationship between preferences for FPS and action with (1) physical aggression, (2) anger, and (3) verbal aggression across all age groups accounting for gaming use, gender, education, self-efficacy and social support as control variables.

They presented two results. The first concerns about gender and videogame experience on stereotypical beliefs about videogaming. Through a 2 X 2 ANOVA, the gist is that individuals with less experiences with videogames held greater stereotypical beliefs about videogames (i.e. “it’s a pastime for boys, it’s for nerds, boys being better in gaming than girls). Interaction effects were found in that frequent gaming women disagreed more strongly that “gaming is a pastime for boys” (M= 1.72) from other groups (e.g. frequent gaming men, M = 1.98), the same is true for “boys are better at gaming than girls” (frequent gaming women, M = 2.03 vs. gaming men, M = 2.47).

In regards to motivations for playing videogame genres, a variety of main effects were found for the gaming genres, however these can be explained by interaction effects.

For causal genres which include puzzle and card games, significant predictors were women with a high level of motivation for gaming immersion and men with high motivation level for gaming control.

For heavy action genres which include horror and first-person shooters, significant predictors were motivations for competition, challenge and social contact (e.g. “I like to communicate with others while gaming”).

Looking over the results section of the paper for a long time, I don’t think I can succinctly describe the many analyses as shown by this simplified model. The summary version is that gender roles (i.e. masculinity and femininity) have indirect influences on gaming behaviours (i.e., competitive, cooperative, goal-oriented, exploration), but directly affect gaming motivations and genre preferences. There are moderating factors, such as age and education. One example is that among lower educated respondents, masculinity has a greater influence on challenge and competition motivations.

My general take home message from these four studies is that there is a complicated flowchart in explaining why men and women play videogames. This theoretical flowchart would have several levels, gender as a continuum rather than a dichotomy (i.e. biological and psychosocial), motivations, personality, emotions, genre preferences, attitudes and beliefs, and gaming behaviours. The connections would have many one-way effects, two way effects and conditional effects as well. This is assuming that we take many demographical variables into account, such as education level, age. However, the theoretical flowchart’s individual components may not fit together because they were constructed from independent findings.

I offer some speculative thoughts to these studies. The studies surveyed respondents’ direct exposure to videogames, although I must point out this is a part of their exposure to videogames. Marketing could be considered as an indirect exposure to videogames and which further complicates the theoretical flowchart. I don’t have much marketing knowledge, but entertainment industries invest considerable resources towards marketing and thus it should be investigated. A frequent observation is that videogame marketing strategies often are reduced to using stereotypes to attract a specific audience or customer base (e.g. Behm-Morawitz, 2014; Scharrer, 2004). This targeted marketing would influence how men and women see each genre and further entrench gendered stereotypes about specific genres and about men and women’s belief who plays them. Men and women may dislike some aspects of a genre or motivation (e.g. violence or competition), but the studies do reveal liked aspects of a genre or motivation that game designers can develop and market into their game.